A Must-stop Place for Locals and Travelers Alike 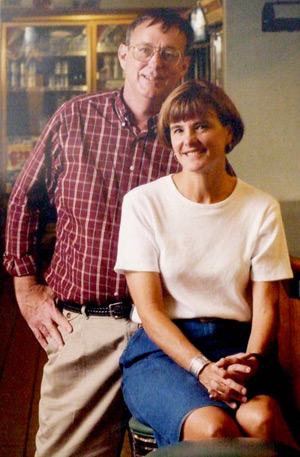 Forget the latest sushi bar or coffee house. The hottest hangout in Alachua County right now might be the Pearl Country Store.

Putting their money where their philosophies are, David and Peggy Carr have transformed a pedestrian U.S. 441 convenience store into a must-stop place for locals and travelers alike.

It’s not the microwave burritos or hot dogs spiked on the rotisserie that brings them in. It’s the tantalizing barbecue and other food at cheap prices. And an eclectic mix of items – fine wine in a rack, Boone’s Farm in the coolers. “Basically, it’s a glorified country store,” David Carr said. “The response has been terrific. It’s really amazing.”

Carr is the son of Archie and Marjorie Carr, noted sea turtle conservationists and environmentalists. He is a wholesale distributor of Florida books, is chairman of the Florida Heritage Highway committee that designates scenic roads and promotes local history.

Peggy Carr, an associate professor of landscape architecture at the University of Florida, also grew up in the area. Her father, Ashby Hammond, was a longtime UF history professor while her mother Margaret Hammond, was a school teacher.

The Carr’s bought the store in May and have been transforming it since then.

“The committee is made up and supported by a lot of people who want to see this area protected – developed, but in line with the old Florida heritage,” Carr said. “It occurred to me that I was doing all this theoretical stuff when here was a store that was for sale. I said, ‘Why don’t we buy it and fix it up in the spirit of the scenic highway,’ and also prove that you can make some money on it. We want to demonstrate that a convenience store can be something more than just a convenience store.”

Little bit of everything

It also has the Sunday New York Times, specialty breads from the small Sartori Longevity Foods bakery in McIntosh and Road Kill Beef Jerky from Belleview.

When locally grown produce is available, the Carr’s sell it. The also plan to sell jams, syrups and other food made by area residents.

The store has a Florida heritage section with maps and books of regional and state interest.

Peggy Carr said the store plans to carry more such items in the future. She will also put her landscaping expertise to practice.

“Phase two is really to work on merchandise. We’re hoping to get more local products that are both an idea of a country store and will help support local people,” she said. “We planted an oak tree on the corner. There used to be one, but it was cut down years ago. I want to try to work on the exterior character a little more, and especially try to use wildflowers – again in line with the scenic highway.”

But the major expansion concerns Big Jim’s Barbeque. A separate area of the store has become a restaurant centered on Big Jim’s, including a counter and stools measured from the set up at Wise’s Pharmacy in Gainesville.

Jim Whitten was a longtime barbecue enthusiast who was working as a Gainesville machinist when he began selling his ribs, pork and chicken at Pearl’s on weekends 18 months ago.

He left the machine shop and is now barbequing every day. Meanwhile, Sharon Hope has begun cooking up breakfast there. She used to own Firpo’s Diner in Gainesville.

Between the breakfast and the barbeque, Pearl’s is packed.

“Business has tripled now,” Whitten said. “We get a lot of trades-people who come in just about every day. Having the counter is really nice and people will just sit up there and talk so much that I get behind.”

Many customers are regulars who travel through Micanopy on their way to Gainesville or Ocala. Others, like Heather Johnson, have only to walk a few steps. She works at the Florida Citizens Bank next door.

“I come in every day for something,” she said. “Everybody here loves it. It’s great food.”

Manager Stella Upton, who has worked at the store for several years and knows many of the customers be name, said she is thrilled with the changes made by the Carr’s and the increase in the business.

“It’s a nonstop store,” she said. “I like the changes for simple fact that I have more customers in here. I get to know everybody and it feels like home.”

Peggy Carr said the store’s success is a reflection of the team employees. The place has become a local hangout. Employees from the Franklin Crates plant are regulars at breakfast and lunch. A couple of men who camp at Paynes Prairie Preserve State Park when they are here for UF football games ride their bikes down for the food.

And sometimes several city commissioners will be in at the same time, prompting the Carr’s to joke they will have to post notices to comply with Florida’s Government in the Sunshine laws.

Peggy Carr said a future goal is to have a pharmacy in the store something Micanopy is without.

Meanwhile, they hope to continue to serve the town’s needs.

“We want to be a local place. We’re not here to compete with some of the other places,” Carr said. “The response has been positive. It’s fun. And we’re at least breaking even.”

Come on down to historic Micanopy to experience Florida’s country charm!